After Dominic and I spent out first night together, I had to leave on a business trip.  The following morning, I packed and got on a plane to Mexico City.  It was a very busy week.  At the time I was working for a retailer and we were opening a store in the central city.  By the time I got on the plane for the return trip, I was so happy to be coming home, I can’t describe it.  Dominic and I had a date night scheduled for the Friday after I got home and we had a very nice time.  It was fun and I cooked breakfast Saturday morning.  (Sorry that’s all the detail you get.  Dominic has sworn me to secrecy about any of the sexy details)  Then I took Dominic to work.

By the time to got home I wasn’t feeling well and went to rest, figuring I was tired.  It was more than that.  I stayed in bed all say Sunday and on Monday morning I could barely get up.  I called the doctor and they got me on all kinds of medication which helped.  On Tuesday I was still tired and hurting, but food was staying down again.

Wednesday afternoon I received a call form Dominic to invite me over for dinner.  I told him about how sick I was and he told me I should come over anyway.  I drove over and when I knocked on the door, Dominic answered and guided me inside the apartment which smelled of chicken soup.  He settled me on the sofa and I ended up lying down while he finished cooking.  He fed me this glorious soup and then beside me as I lay on his sofa for the rest of the evening, rubbing my stomach which had been through hell.  They say that the way to a man’s heart is through his stomach and Dominic proved that in more ways than one.

Next up – Meeting the parents 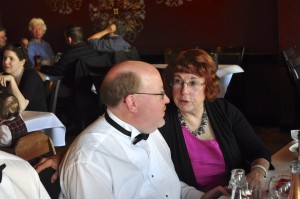