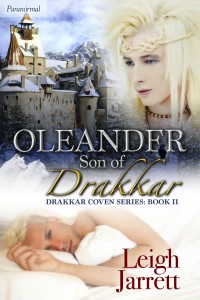 The unrelenting seduction of Oleander’s cool, flawless skin—and deep, captivating eyes. The concern in his voice—the touch of his hand. The exhilaration and pride elicited by the sight of Oleander waiting for him after the visit with his family had left him feeling disappointed and unfulfilled.

Amidst the chaos of his sexual reckoning, Timothy is compelled to uphold an intimate pact struck between himself and Oleander, and chooses to follow him north to Drakkar Castle—the threat of war upon them. Grimmr Coven is advancing deep into Drakkar Coven territory, and only Oleander may know the reason why. He had lived amongst the Coven Grimmr for many decades with his human lover, Torkel, and fears that a far greater threat is coming, forcing Grimmr Coven south into Drakkar Coven territory.

Left behind while Oleander goes in search of answers, Timothy’s inner turmoil becomes unbearable. His only company enroute to Drakkar Castle, Alexis, a vivacious, blue-eyed seductress with a secret, intent on stealing him away for reasons that would launch the already fractured family of Drakkar at each other’s throats.

Find it on Amazon, Barnes and Noble, All Romance eBooks, or  Goodreads.

Oleander released Timothy’s shoulder and came along side of him, resting his hip against the table. “Timothy, I have something to ask you. And you must give my question a great deal of thought before answering.” He lifted his hand to touch Timothy’s face, cupping the rugged chin as he brushed his thumb along Timothy’s cheek. “Whatever you decide …I will honor your choice.”

A nervous thirst gripped Timothy as he acknowledged his acceptance of the terms Oleander spoke of, despite having little clue of what was to be asked. He reached for the nearest glass, praying it was filled with wine, his trepidation mounting.

“Proceed,” he said, the tightness in his chest relinquishing somewhat as the full-bodied offering he had chosen trickled warm and comforting down his throat, infusing his body steadily.

Oleander rolled his shoulders and set his stance, attempting to exude confidence where truly, there was none.

“Drakkar Coven will soon be at war with the coven of Grimmr. Much sooner than we had anticipated.” His façade cracking somewhat, he rubbed at the back of his neck. “It pains me that such conflict has become necessary.”

Timothy reached for the hand Oleander had pressed to the tabletop, and stroked his fingers across it.

“Grimmr is the coven you spoke of …to the north?”

Oleander simply nodded then removed his hand from beneath Timothy’s, wandering off in the direction of the window. He moved a heavy curtain aside, staring out at the moon, then let the curtain drop. Its illumination would soon be guiding him home.

“I will be heading to Drakkar Castle at next moonrise to take my place at my father’s side in preparation.” Oleander turned and leaned against the wall, crossing his arms. His place at his father’s side—he sneered. An honorary position that was only extended to him during times of unrest and war. His father, arrogant and oblivious to what was truly coming—that a far greater threat was gathering; a threat that was likely the reason Grimmr was scouting south into Drakkar Coven territory. A threat with which he was all too familiar.

He exhaled and dusted away the direction his thoughts were taking him, returning his attention to Timothy.

“You may accompany me north to Drakkar Castle,” he began. “Or you may stay here. The choice is yours.”

Timothy rose to his feet. “How …how long would you be away?”

“Oh.” Timothy sunk back into his seat. “Then, I am uncertain.” He picked at the edge of the table, considering what his life would look like if he remained behind. Perhaps he could rearrange his sleep pattern in Oleander’s absence and help work the farm each day.

He scratched his head. Doing so would closely resemble his old life. A life with which he had been completely unsatisfied.

Aside from farming, the castle had little to offer him.

“If you desired to do so, you could rejoin your family.”

“You would allow me to return home?” Timothy rose to his feet again, discarding his napkin. “Truthfully?”

“It would pain me to do so, but I cannot reasonably expect you to wait for me within these castle walls.”

“And upon your return?”

Oleander studied Timothy, admiring the striking, masculine beauty of his companion. The feel of Timothy’s body beneath his own, gasping and mewling, challenging him to continue the pain, had been truly exquisite. He could spend an eternity eliciting such responses from him. Losing him would be painful.

“I would call upon you and inquire as to whether or not you desired to return to me.”

Oleander placed a hand to his heart and bowed.

Timothy set his hands on the table to steady himself. Ever since he had arrived at the castle, he had been seeking to escape and return home. Now he was being offered the opportunity to leave the castle forever. To leave Oleander behind—forever.

“You would not return and recapture me?”

“No, Timothy.” Oleander reached for the stone sill of the window. The life he had imagined with Timothy slipping from him before his eyes. “Your entire family would be protected from any further capture. I give you my word.”

Timothy glanced up at Oleander, who was studying him anxiously. “But what of our agreement?” he asked.

“You …” Oleander lifted a hand to his face, touching his lips, unable to respond, his astonishment so complete. It had not even occurred to him that his new companion would factor their agreement into his decision. He had fully expected Timothy to return home to his family—reclaim his freedom.

He moved to speak, to clarify his offer of freedom, but the state of Timothy’s demeanor as he approached left him speechless.

An uncompromising decision had been made. 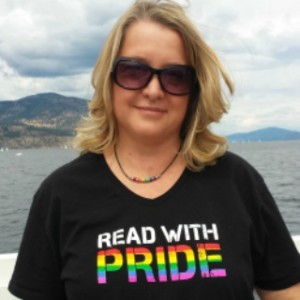 About the Author
Leigh Jarrett is a bestselling Canadian author of LGBTQ Romance. Queer, quirky, and passionate. Lover of antique stores, the smell of lye and oil as it turns to soap, cathedral groves, and bright colors. In her hometown of Kelowna, BC, Leigh is an advocate for the LGBTQ community, celebrating their diversity, and affirming their most basic of human rights–to love and be loved.

Leigh Jarret has offered two giveaways for this tour! One commenter on each blog during the tour will be entered to win a signed book mark. There will also be a tour-wide Rafflecoptor to win another signed bookmark and a signed paperback of Oleander. Both giveaways are open to readers in the US and Canada.
a Rafflecopter giveaway