Find it on: Goodreads, Amazon, Loose Id, All Romance eBooks 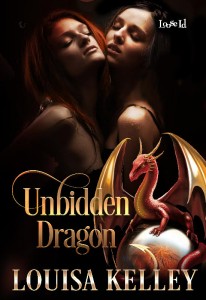 Maeven is on a mission. One big and bold enough for her coming-of-age quest called the Fieri, and important enough to gain her a trip off Dracan, the secret, hidden sanctuary of the dragon shape-shifters.

Success in her once-in-a-lifetime challenge means everything – respect, honor, and the bestowal of her full magical powers. Not to mention doing something vital for the survival of her species.

She’s given strict rules of behavior while living in earth society. Rule number one: keep her true nature hidden. Rule number two: no emotional involvement with humans, despite the age-old, near irresistible attraction between the two races.
Then Maeven meets plucky, devious, adorable Frankie living in Portland, Oregon. Who, as it turns out, accidentally, shockingly, shape-shifted – the night before. Ah. So much for the rules.

Frankie is frustrated with her oddly larcenous life not going anywhere in particular. One fateful weekend, she camps alone in the mountains to gain fresh perspective – with a little help from a baggie of something special. That afternoon, in a crazed, furious confrontation with hunters, Frankie shape-shifts into a dragon. And discovers a race of magical beings who insist she’s one of them, too. Especially the shining, gorgeous, red-head – who promises to teach her so much.

Maeven shut the door, turned, and regarded her. A clench of something tightened Frankie’s stomach. Maeven exuded a dangerous sensuality that both promised and threatened, fueling Frankie’s sense that Maeven carried the greater danger.

She eyed the door. How fast would she have to move, to keep Maeven from catching her? And where were these thoughts coming from?

Frankie glanced down at her empty mug. “No, thanks.” The silence lengthened, and she concentrated on the sounds of the wood hissing and burning and tried to avoid Maeven’s questioning face. And not stare at her lush lower lip and slashes of dark eyebrows arching over green eyes.

Maeven sat next to her and gave her hand an unexpected squeeze where Frankie clenched it on the table. “What do you remember? Anything?”

Her fingers twitched, enclosed in the surprising heat of Maeven’s skin. Warmth sank into her cold hand, yet after a few seconds, she slid her hand away. Too soon to trust. Even if the woman looked like the goddess Athena. With red hair.

The sense that she needed to get out, to run, flee danger, continued to prickle. She eyed the door again. Ingrained habits of distrust, learned from painful lessons of betrayal, rose to nearly choke her. She shook her head in an effort to dispel her foggy, post-high state.

“I’m not sure,” Frankie said. “Only flashes here and there.” She swallowed against the sudden taste of bile in her throat, and a wave of nausea hit her, potent reminders of the drug use from yesterday. The baggie of mushrooms she’d been warned not to consume all at once. Which she did, of course. Why, why did she continue to make such stupid choices?

The lingering effects of her trip probably contributed to how weird she felt. Or not. Arghh. Why was she such an idiot? Her decision-making abilities were coming undone.

She really did need to get out of here, get home, and recover her senses. How to manage that seemed impossible. She dropped her head into the flat of her arms crossed on the table. “I am so fucked.”

“I’m sorry.” Maeven’s voice floated somewhere above her, faint, like an angel’s. “I know this must be confusing.”

Frankie jerked at the touch of Maeven’s hand on her shoulder and shot to her feet. Her head wouldn’t clear. Maeven seemed both angel and devil in the space of seconds. The sense of wanting to go sharpened. She couldn’t shake the feeling they didn’t want her to leave, for reasons they weren’t admitting. Maeven watched her so closely she seemed to see everything, know what Frankie wasn’t saying.

Paranoia filled her. She didn’t care if she slept in the woods overnight. She wanted out. Space. These people scared her, and she pushed away the fact that they also aroused her as unimportant to the plan of action.

“Yeah,” Frankie said, hating the tremble in her voice. “I feel pretty weird. I’m just not quite…sure what happened, but thanks so much for the clothes and tea and stuff.”

“Of course, it’s the least we can do,” Maeven said. She leaned back and ran her fingers through her hair in a nervous gesture. Frankie watched, fascinated despite herself. The light caught and shimmered on the various shades in Maeven’s hair. A strand along her cheek shone like a rose in the soft cabin light.

Stop that, Frankie chastised herself. No distractions. Her decision solidified. Go, at the first opportunity. Run, hide… She fought her anxiety. Where would she go? And in the dark?

No matter. Her jaw clenched. She’d been a champion long-distance runner in high school, and she’d stayed in shape. But could she outrun the totally buff goddess?

SHADOWS CLIMBED THE rough wood walls of the cabin. The flickering candles cast a soft glow as day faded into evening, bathing the room in golden tones. Maeven looked down and realized her blue aura was mingling with the candlelight. She quickly doused the shine. Pesky shape-shifter light. Hardest thing to hide from humans. And impossible to explain. She flashed a look at Frankie, hoping to see more blue light, but Frankie’s pale face seemed even more taut and white.

Frankie avoided her eyes and radiated a palpable sense of unease. Made it hard to breathe, hard to keep a clear head, on multiple levels. Her predator’s instincts salivated; the hunting instinct activated with the enticement of Frankie’s anxiety. Maeven struggled not to react.

Frankie cleared her throat. “Okay if I use the bathroom?”

“Sure, of course. Through that door by the bed.” Maeven pointed in the direction of the bath, then tapped her fingers on the table while she waited. Fieri. Yes. The path coursed in her blood; a sense of rightness sent adrenaline racing through her body. Finally. Her doubts fell away. The course was set, even if she was full of unanswered questions. Taranis and Alwen had not forgotten her. How could she forget them? Listen, listen, listen…

Good. Yes! her sister-self cried, tuned as always to the nuances of Maeven’s thoughts. Want her. Go. Now!

Her sister meant fly with Frankie. The thought caused her heart to pound. “Fly?” she asked inwardly. “So I’m right?”

No coincidences. The Draca believed life unfolded according to the plans of Taranis and Alwen, gods of Draca, the divine beings who loved their shape-shifting children above all else. Her Fieri continued as planned, shaped by the ones who ruled her magical world. Trust. Did she?

Her sister-self beat an excited rhythm in her head. “Kisskiss,” she said. The sly other half of her never missed a twinge of lust. She gave her sister a mental kick.

“Stop it.” No lusting after the potential main objective. Frankie had found her way here despite layers of magical protections. Therefore, Frankie must possess Draca blood. It was the logical conclusion.

Maeven glanced at the closed bathroom door. It had been at least ten minutes. No sounds of water running or toilet flushing. Uneasy, Maeven stood up. “Frankie? You doing okay in there?”

“Frankie?” she said louder and knocked on the door. When silence continued, she turned the knob. Locked. She rattled it. “Frankie?” Maeven thrust her hip against the wood a few times with no result. “Oh, blast it to the ninth hell,” she muttered and, with a fierce grip, tore the handle off and, with easy Draca strength, crashed through the pine door.

The window swung wide open, curtains blowing in the cold breeze. “No!” She rushed over and stared into the surrounding yard. Even with the moon, it was so dark Frankie could easily be hiding close by. Why, why was she running?

Maeven raced through the house, her sister-self agitated with excitement. “Chase!” she cried. An irresistible challenge to a Draca.

“Find her,” she said. “Find Frankie.” Predator instincts kicked in; her eyesight changed and cleared; the ability to see in the dark took over. She sniffed the air and caught the scent.

“Fly?” Maeven’s shoulder blades ached where her sister-self strained at the constriction of flesh.

“No, not yet. Run. Fast!” Maeven’s command to her sister-self ignited her into action.

She took off, inhaling the earthy, delicious traces of Frankie’s scent as she raced to catch her. Through the darkened, dense forest of spruce and pine, she dodged fallen logs and trampled through bushes of thorny blackberries, ignoring a hundred spiky digs. In the distance the sounds of Frankie’s panicked breathing carried on an obliging breeze. Maeven ran like a deer, the moonlight guiding the way, with light feet that bounded over any obstacles, nothing slowing her pace. Frankie’s gasps grew closer.

“Frankie! Stop…please! I just want to talk to you.”

Maeven picked up her speed. There—less than ten feet in front of her. Frankie threw a frightened glance over her shoulder, and then her foot hit a stump and she went flying, arms splayed just as Maeven dived to tackle her.

They went down in an explosion of grunts and shrieks. With a nimble twist, Maeven landed on top, spread-eagled over Frankie. She pinned her wrists to the ground and held firm while Frankie bucked and kicked.

“Get the hell off me! What the— Umpff…” Her last words were muffled as Maeven cupped her hand over Frankie’s mouth.

“Frankie,” Maeven said, yanking back on her emotions like taming a tightrope snapping in the wind, “I only want to talk. Please. For God’s sakes, I’m trying to help you.” She lifted her weight up a little but stayed put, knees on either side of Frankie’s hips, and tried not to notice the riot of sensation caused by the soft, shapely body under hers. Her sister-self’s excited cries increased in volume until Maeven could hardly think.

Frankie glared at her and went still.

“Okay?” Maeven asked and raised her hand from Frankie’s mouth while keeping a grip on her wrists. Ignoring her sister-self keening “mineminemine” was impossible. They had chased, they had caught, and her sister demanded reward.

Yet Maeven didn’t move, and Frankie remained still and unresisting. Puffs of white breath circled in the growing cold, and she knew they had to get going. Frankie’s eyes gleamed in a shaft of moonlight with anger…and something else. As if caught in a dream spell, she hesitated, unable to take her eyes off Frankie’s lips.

Her Dracan instincts threatened lusty takeover, and Maeven whimpered with conflicted need. The moon had risen to full height in a black sky, and the forest was flooded with brilliant lunar light. Magic. The sanctuary overflowed with aroused shape-shifter sensuality.

Words didn’t have to be necessary for Maeven to find the answers she sought. There were other ways. No. Get up now. Really. She tried to make her muscles move, and nothing happened. Blast it!

She heard Frankie’s indrawn breath like an invitation. Coherent thought fled. She leaned down and pressed her lips to the outline of Frankie’s mouth. For a few seconds, Frankie’s lips softened, opened, and then a small, hard fist shot out and punched Maeven’s cheek. Shocked, she slid off, reeling, into the cold mud and leaves.

Romance and science fiction took firm hold of Louisa Kelley’s imagination at age nine, when she read the books Little Women, by Louisa May Alcott, and the Narnia series, by C.S. Lewis. She is convinced that the genre paranormal romance, which developed years later, came into existence purely for her benefit. After all, it’s what’s been in her heart all these years.